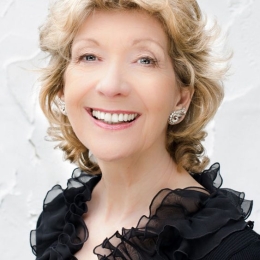 Dame Felicity Lott was born and educated in Cheltenham, read French at Royal Holloway College and singing at the Royal Academy of Music. On the opera stage, her performances of the Strauss and Mozart roles in particular have led to critical and popular acclaim worldwide. She has appeared at the Royal Opera House Covent Garden, Vienna State Opera, Glyndebourne Festival and Bavarian State Opera and in Paris, at the Opera Bastille, Opéra Comique, Théatre du Châtelet, and Palais Garnier. In the United States, she has performed at the Metropolitan Opera New York, the San Francisco Opera and the Lyric Opera of Chicago.

She has sung with the world’s leading orchestras including the London, Vienna, Berlin, Munich and New York Philharmonic Orchestras, the Concertgebouworkest, the Deutsche Staatskapelle, the Cleveland, Suisse Romande and Tonhalle orchestras, as well as the Boston and BBC Symphony Orchestras, working with conductors such as Solti, Mehta, Welser-Moest, Masur, Armin Jordan, Previn, Sir Andrew Davies, Rattle and Philippe Jordan.

She has given recitals at the Salzburg, Munich, Prague, Bergen, Aldeburgh and Edinburgh Festivals, the Musikverein and Konzerthaus in Vienna, and throughout Paris. She is a Dame Commander of the British Empire and a Bayerische Kammersängerin. In 2010, she received the Wigmore Hall Medal marking her significant contribution to the hall. She has also been awarded the titles Officier de l’Ordre des Arts et des Lettres and Chevalier de l’Ordre National de la Légion d’Honneur by the French Government, and honoured with the 2015 Incorporated Society of Musicians Distinguished Musician Award and the Lifetime Achievement Award at the 2016 International Classical Music Awards.