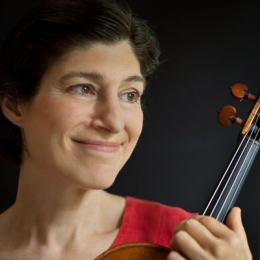 Hailed as “an artist who combines a probing, restless intellect with enormous beauty of tone,” Kim Kashkashian’s work as performing and recording artist and pedagogue has been recognized worldwide. She won a Grammy Award for her recording of Ligeti and Kurtag solo viola works in 2013, and received the George Peabody Medal and Switzerland’s Golden Bow Award for her contributions to music. In 2016, she was elected a Fellow of the American Academy of Arts and Sciences.

Kashkashian has forged creative relationships with the world’s leading composers—including György Kurtág, Krzysztof Penderecki, Alfred Schnittke, Giya Kancheli, and Arvo Pärt, and her long association with the ECM label has yielded a discography that has garnered an abundance of praise and international awards.

Kashkashian, who studied with Karen Tuttle and Walter Trampler at Baltimore’s Peabody Conservatory and Felix Galimir at Vermont’s Marlboro Festival has held teaching positions at Indiana University, the Freiburg Hochschule für Musik, and the Hans Eisler Hochschule of Berlin.  Currently, Kashkashian makes her home in Boston where she coaches chamber music and viola at New England Conservatory of Music.

Kashkashian is Founder and Artistic Director of “Music for Food” a musician-led hunger relief initiative that to date has presented hundreds of artists in concert which have created more than 500,000 free meals for people in need.