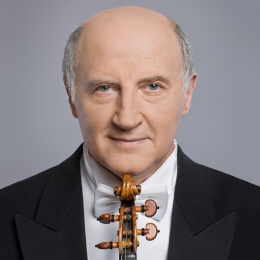 Boris Kuschnir was born in Kiev in 1948 and studied violin at the Moscow Tchaikovsky Conservatory with Boris Belenky and chamber music with Valentin Berlinsky, of the Borodin Quartet. His many encounters with Dmitri Shostakovich and David Oistrakh, with whom he also studied, have had a lasting influence on his artistic development.

He has performed as a soloist and a chamber musician in some of the world’s most illustrious venues: Musikverein in Vienna, Teatro alla Scala in Milan, La Fenice in Venice, Wigmore Hall in London, Concertgebouw in Amsterdam, Berlin Philharmonie, Théâtre des Champs-Elysées in Paris, as well as in the Tchaikovsky Conservatoire in Moscow and the Ishibashi Memorial Hall in Tokyo. He has participated in numerous international festivals such as Salzburger Festspiele, Gidon Kremer’s Lockenhaus Festival, Wiener Festwochen, Besançon, Washington, Spoleto, Naples, Stresa, Bregenzer Festspiele, Sviatoslav Richter Winter Festival in Moscow, and Verbier Festival in Switzerland.

He won numerous prizes at international violin and chamber music competitions in Paris, Belgrade, Sion, Bratislava, Florence, Trieste, and Hamburg. He has given master classes and served as a jury member of renowned international competitions including the Tchaikovsky, Queen Elisabeth, Nicolò Paganini, Tibor Varga, Michael Hill, and Eurovision.

Both as a soloist and chamber musician, Boris Kuschnir has made numerous recordings, most notably the complete Mozart piano trios (EMI) and Schumann’s complete works for piano trio (Naxos).

In 1982, he became an Austrian citizen, and, since 1984, has been Professor at the Vienna Conservatory. In 1999, he was also appointed University Professor at the Music University of Graz. Boris Kuschnir plays a violin made by Antonio Stradivari, Cremone, 1703, the “La Rouse-Boughton,” on loan from the Austrian National Bank in recognition of his artistic performance and his service rendered to music.