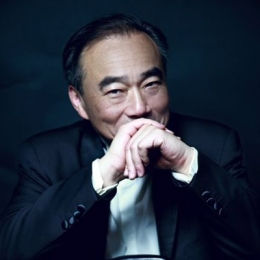 Violinist Cho-Liang Lin is lauded the world over for the eloquence of his playing and for the superb musicianship that marks his performances. In a concert career spanning the globe for more than thirty years, he is equally at home with orchestra, in recital, playing chamber music, and in a teaching studio.

Cho-Liang Lin has appeared as soloist with leading orchestras around the world, and more recently he has expanded his orchestral engagements to include performances as both soloist and conductor. Lin’s extensive discography includes recordings for Sony Classical, Decca, Ondine, Naxos, and BIS. His albums have won such awards as Gramophone’s Record of the Year, as well as two Grammy Award nominations.

As Music Director of La Jolla Music Society’s SummerFest from 2001 to 2018, Lin helped develop a festival that once focused primarily on chamber music into a multidiscipline festival featuring dance, jazz, and a burgeoning new music program. In Asia, Lin serves as Artistic Director of Hong Kong International Chamber Music Festival, and he was recently appointed Artistic Director of the National Taiwan Symphony Orchestra’s Youth Music Summer Camp where he also conducts performances and serves as a member of the string faculty.

Born in Taiwan in 1960, Cho-Liang Lin began his violin lessons when he was 5 years old. At 12, he went to Sydney to continue his musical studies with Robert Pikler. Inspired by an encounter with Itzhak Perlman while in Sydney, he traveled to New York in 1975 to audition for Perlman’s teacher, the late Dorothy DeLay, at the Juilliard School. At the age of nineteen Lin made his New York debut at the Mostly Mozart Festival and soon thereafter with the New York Philharmonic, and his concert career was launched. In 2000, Musical America named Lin its “Instrumentalist of the Year.” He was invited to join the faculty of the Juilliard School in 1991. More recently he was appointed professor of violin at Rice University’s Shepherd School of Music. He plays the 1715 “Titian” Stradivarius.