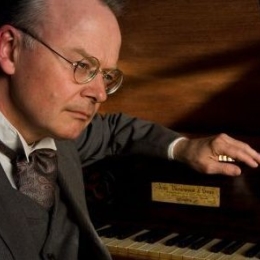 David Owen Norris, the first winner of the Gilmore Artist Award, has played concertos all over North America and Australia, along with several appearances in the BBC Proms. A television programme entirely devoted to his work on the Elgar Piano Concerto, ending with a spectacular live performance of the whole work, has been shown frequently. In January 2016 he recorded his own Piano Concerto in C with the BBC Concert Orchestra.

Norris began his career by accompanying such artists as Dame Janet Baker, Sir Peter Pears & Jean-Pierre Rampal, and has enjoyed long-standing partnerships with Ernst Kovacic, Sir John Tomlinson, and the late Philip Langridge. His unusually varied career has also seen him as a repetiteur at the Royal Opera House, harpist at the Royal Shakespeare Company, Artistic Director of the Petworth Festival & the Cardiff International Festival, Gresham Professor of Music, and Chairman of the Steans Institute for Singers at the Ravinia Festival in Chicago.

Norris has been a familiar face on music television since 1990, when he presented The Real Thing?: Questions of Authenticity on BBC2, described by the Daily Telegraph as ‘the most probing and literate programme on music seen for a long while’. He has helped make BBC2’s PromsExtra one of the most watched classical music programmes in the world.